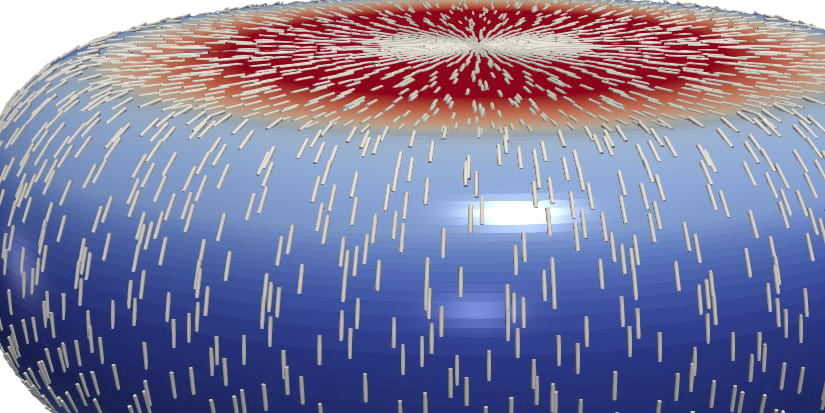 The actin cortex in conjunction with the cell membrane is a thin film that encloses the viscous interior of most animal cells. The actin cortex is a complex viscoelastic material which exhibits active prestress due to inherent microscopic force-dipoles constituted by molecular myosin motor proteins. Observations of cells show that the actin cortex film can form self-organized patterns and actively deform itself. The cortex is thus a key regulator for the emergence of cell shape and vital for cell function for instance during cell division.

The biological importance of the cortex is illustrated in the large number of biological publications on the biochemistry and the mechanics of the cortex in the last decade.However, to date, the increasing experimental attention to viscoelastic cortex dynamics is not yet reflected in the efforts in mathematical modelling. In particular no numerical method is available to simulate viscoelastic surfaces enveloping a viscous interior fluid. The goal of the proposed project is to quantify the mechanical properties of the cell cortex in a close collaboration of numerical simulations and experimental measurements. In a first part, we will develop and analyze a mathematical model of an active viscoelastic surface immersed in viscous fluids. The model will be simulated numerically to extract the cortical force response of cells under oscillatory compression between two parallel plates. Using different probing frequencies allows to pass from an elastic to a viscoelastic response of the cortical layer. A clever combination of experimental data with numerical simulations will reveal fundamental mechanical properties of the actin cortex in mammalian cells, which are yet unknown. Model validation is done by comparison to experimental data of viscoelastic cortex dynamics and to solutions of Project Reusken/Voigt in a limiting parameter regime of a fluid deformable surface.

In a second part, we will mathematically model mechanochemical feedback in the cortex and simulate cortical pattern formation in the regime of high active prestress. In particular, we will for the first time test the influence of viscoelasticity and stress-stiffening on emerging cortex patterns. We will connect our results with insights from the Project Neukamm/Sander on prestressed thin structures and compare our findings with previously reported observations of cortical pattern formation in cells, in particular during the process of cell division.