Viscoelastic dynamics of the cell cortex 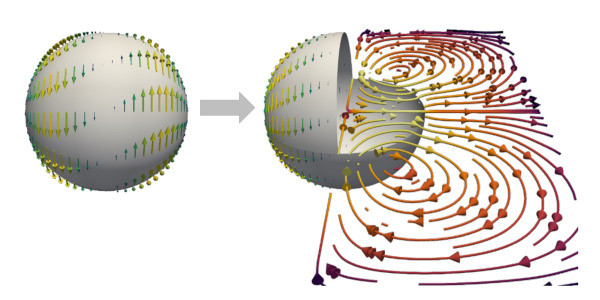 The actin cortex in conjunction with the cell membrane is a thin film that encloses the viscous interior of most animal cells. The actin cortex is a complex viscoelastic material which exhibits active prestress due to inherent microscopic force-dipoles constituted by molecular myosin motor proteins. Observations of cells show that the actin cortex film can form self-organized patterns and actively deform itself. The cortex is thus a key regulator for the emergence of cell shape and vital for cell function for instance during cell division. To understand such processes, we require novel mathematical and biophysical approaches, the building blocks of which were developed in the first funding period: (i) a combination of experimental measurements and simulations to extract rheological properties of the cell cortex, (ii) a frame-indifferent numerical method to simulate a deforming viscoelastic surface, and (iii) a numerical method to describe the non-linear dynamics of active viscous surfaces. The goal of the proposed project is to combine the developed tools to explore mechanisms of pattern formation and flow generation in the active viscoelastic cortex. For this purpose, we will work in a close collaboration performing numerical simulations and experimental measurements. A robust time discretization will enable three-dimensional simulations of cortical self-organization which can be matched with experimental results of mitotic human cells. From the numerical point of view, we will characterize the influence of cortex rheology and the role of chiral surface flows. From the experimental point of view, variation of cortical contractility and viscosity will provide a means to systematically assess their influence during mechanochemical pattern formation. In a tight combination of numerical simulations, analytic approaches, and experimental results, we will subsequently explore cortical self-organization, and thus reach a better understanding how cells exert forces on their environment and regulate their shape.